A team of scientists at NASA’s Glenn Research Center in Cleveland recently completed a technology demonstration that could enable new scientific missions to the surface of Venus. The team demonstrated the first prolonged operation of electronics in the harsh conditions found on Venus. 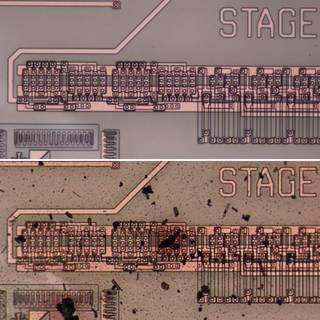 Integrated circuit before (above) and after (below) testing in Venus atmospheric conditions.
Credits: NASA

Current Venus landers can only operate on the planet’s surface for a few hours due to the extreme atmospheric conditions. The surface temperature on Venus is nearly 860 degrees Fahrenheit, which is hotter than most ovens, and the planet has a high-pressure carbon dioxide atmosphere. Because commercial electronics don’t work in this environment, the electronics on past Venus landers have been protected by thermal and pressure-resistant vessels. These vessels only last a few hours, and they add substantial mass and expense to a mission.

To overcome these challenges, the Glenn team developed and implemented extremely durable silicon carbide semiconductor integrated circuits. They then electrically tested two of these integrated circuits in the Glenn Extreme Environments Rig (GEER), which can precisely simulate the conditions expected on Venus’ surface. The circuits withstood the Venus surface temperature and atmospheric conditions for 521 hours – operating more than 100 times longer than previously demonstrated Venus mission electronics.

“We demonstrated vastly longer electrical operation with chips directly exposed — no cooling and no protective chip packaging — to a high-fidelity physical and chemical reproduction of Venus’ surface atmosphere,” Neudeck said. “And both integrated circuits still worked after the end of the test.”

“This work not only enables the potential for new science in extended Venus surface and other planetary exploration, but it also has potentially significant impact for a range of Earth relevant applications, such as in aircraft engines to enable new capabilities, improve operations, and reduce emissions,” said Gary Hunter, principle investigator for Venus surface electronics development.

Results of the test are detailed in a peer-reviewed journal article titled “Prolonged silicon carbide integrated circuit operation in Venus surface atmospheric conditions,” which was published in AIP Advances.

For more information on Glenn, visit: